The best VR apps for Android are listed here, including some free and paid experiences. Not all of these will be available on every device but they’re the best-rated options that have been found to work well in general. 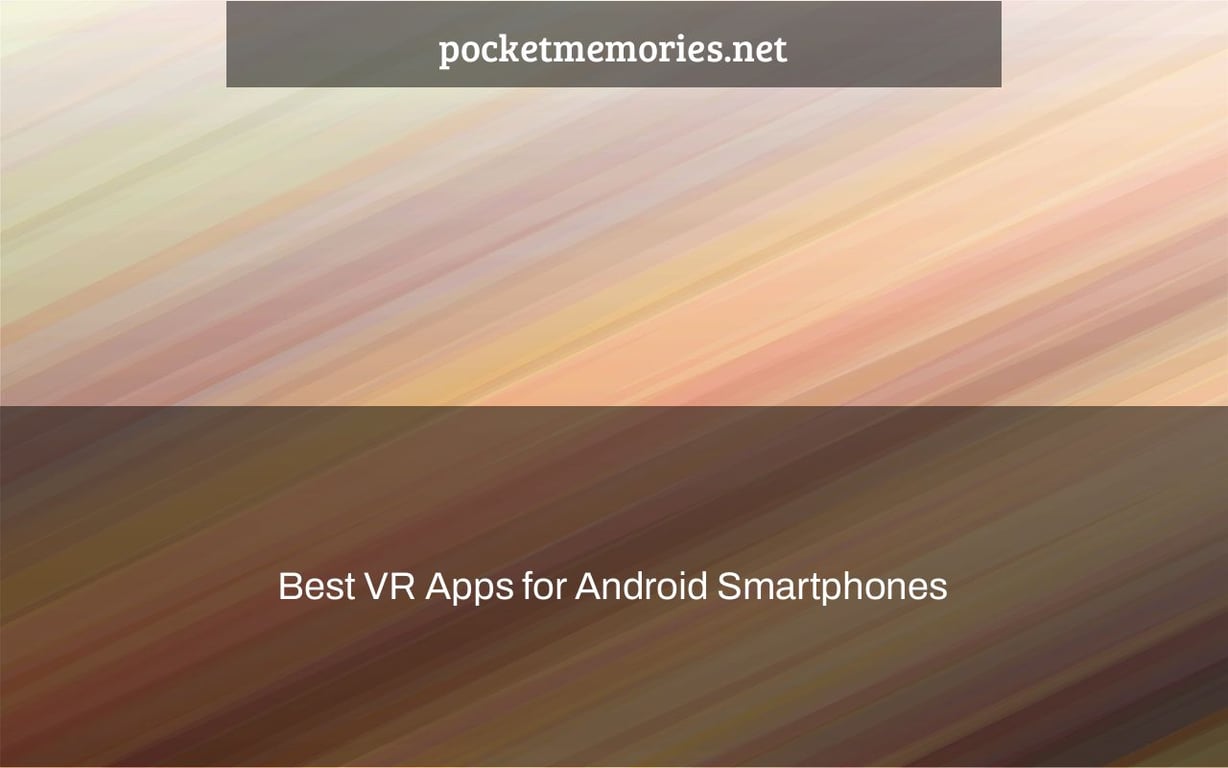 With Google’s Cardboard software, you can enjoy a variety of virtual reality experiences right on your Android phone. You may also discover additional samples, such as a tour guide, for free in this app. However, the most notable aspect of this software is that it provides a virtual reality experience when flying over the world. It also takes you through the closure and varied appearance of many museums. As a result, you should give the app a go on your Android smartphone. The Facebook Technologies’ Oculus app allows you to download and install a variety of popular VR games from the Oculus Store. On the Oculus Rift and Rift S, you can even access VR applications remotely. The program allows users to reserve virtual seats for live concerts, sports, and events via the internet. You’ll also get notified about forthcoming releases, special offers, and events. Install this software on your Android phone to access 1000s of VR games. Within Unlimited, Inc. created the Within VR app. You may enjoy the greatest cinematic virtual reality in this app. It has a lot of well-known 3D material with binaural sound effects. This software provides free access to a large number of award-winning virtual reality documentaries, music videos, animation, and horror films. Try to download the video you want to watch before playing it in this app to get the finest VR effects. The Fulldive VR software was created by Fulldive Co Entertainment. This program integrates seamlessly with Fulldive Browser, allowing you to earn money and major cryptocurrencies like as Bitcoin and Ethereum. Over 500 famous VR games and 1 million movies with 3D effects are available to search, as well as 360-degree captivating photographs. You may earn a gift card just by talking, browsing, listening to music, and seeing virtual reality videos on this app. ARLOOPA is one of the ARLOOPA Inc.’s augmented and virtual reality applications. An augmented reality camera is included with this software. You may use the camera to create a virtual planet with outstanding digital effects and a variety of scientific models. It also allows you to play virtual games with exotic creatures such as dragons, sharks, dinosaurs, and more. Install this software on your Android phone to have access to all of the popular virtual stuff. Google’s Daydream is a popular virtual reality software for Android. This app allows you to watch high-definition VR material on your phone. You can get the most out of virtual reality and access a growing library of popular VR applications and games. You’ll need a Daydream-capable headset to utilize this app on your Android phone. Please check the official Daydream website before downloading this app on your Android smartphone to guarantee Daydream Health and Safety. Netflix is one of the Daydream-compatible Android devices’ specialized VR apps. With this software on your Android phone, you can view all of Netflix’s popular original programming, films, and documentaries in virtual reality. The app even has a section dedicated to kid-friendly programming. Install this incredible software on your Android phone and connect in with your Netflix account to view all of the material in VR. The Gizmo VR Video Player software was created by Gizmo VR LTD. It’s the best app for watching virtual reality videos in 360 degrees. An integrated browser, media library, automated frame packing detection, cinematic mode, and an integrated download manager are all included in these programs. It also supports all common video file types, including 2D, 360-degree, and 180-degree. Install the Gizmo VR Video Player on your Android smartphone to take use of all of its capabilities. AppTeeka’s VR Games Store app There are a lot of unique VR games and demonstrations under VR Games. It’s a fantastic software for installing VR games on any Android smartphone. Adventure, thriller, simulator, fantasy, SciFi, shooting games, racing games, and horror games are among the VR genres offered in this software. Installing and playing any VR game in this app will provide you with the best VR experience possible. Intruder Shanky Video Players & Editors created the VR Player app. Using the VR box or cardboard, you may watch any video on your Android phone using this software. In the cinematic experience, the app allows you to view all of the movies in virtual reality. Almost all video formats are supported by this software. It also has a built-in user interface, screenshot capability, dual audio support, 4K resolution, and subtitle support. This software will provide you with a fantastic VR experience on your Android device. Velocious Technologies Inc.’s VeeR VR app It features the most recent film festival lineups, as well as award-winning films, animation, science fiction, and documentaries. With a VR headset, you may download, bookmark, and preview any content to watch later. HTC Vive, Oculus Go & Rift, Xiaomi, Steam, DPVR, and Pico are among the VR headsets that support the app. Install this software on your Android phone to get a fully immersive VR experience. Interesting Apps & Games’ VR Space Games In the genre of Space Games, Simulation has become the finest shooter game. It has been modified to include modern virtual reality technologies. Anyone interested in astronomy should give this app a try. You may experience breathtaking panoramas of VR space using this app. Install this software on your Android smartphone to get a complete VR space experience and play Space Games. Maysalward Arcade’s Aliens Invasion Virtual Reality (VR) Game is one of the greatest VR games for Android. You’ll need a Cardboard viewer on your Android smartphone to use this app. It may be used with Google Cardboard. This software has realistic 3D visuals that recreate the ambiance of New York, Pisa, and Paris in real time. The player is tasked with defending New York, Pisa, and Paris against extraterrestrial onslaught. Install this software and play its virtual reality games to get a full-featured 3D VR experience. Fionxy Games Racing created the software VR Traffic Racing In Car Drive. It’s a popular virtual reality game software that works on any Android handset. This program has aesthetically beautiful realistic 3D visuals as well as virtual reality elements. You may virtually drive across various nations with this app. You may also steer your vehicle in any direction, do power sliding tricks, and stop at any moment. This software contains a variety of online and offline games. CEEK is a virtual reality application that is both entertaining and simple to use. On the CEEK VR headset, this software will operate better. It will be the premier location for all music fans interested in experiencing live VR ideas. It also includes interviews with a slew of well-known musicians. U2 in the Rose Bowl, Katy Perry Live in Rio, 5 Seconds of Summer Documentary, Lady Gaga in Madison Square Garden, and Elton John in Madison Square Garden are just a few of the popular videos available on this app. To sum it up

The majority of the applications on our list of the top VR apps for Android are free to use. Using these applications on your Android phone, you may have a virtual reality experience at a low cost. If you have any questions for us, please leave them in the comments area below. Don’t forget to leave a comment on your favorite app from the list above.

The “virtual reality apps for android” is a category of apps that are designed to give users an immersive experience in virtual worlds. These apps can be found on Google Play and the App Store.

Which is the best VR app for Android?

A: You can use the Google Play Store or you could use our app – Beat Saber for Android on your phone.

Can you use VR on Android?

A: Due to the vast differences in hardware and software between Android, iOS, and PC platforms, it is impossible for a single bot to answer this question. For more information on how your device runs Beat Saber please refer to the following article.

What are the best free virtual reality apps?

A: We do not know what the best free virtual reality apps are because we have only reviewed a very limited number of them.