The university has removed a monument to the victims of China’s 1989 Tiananmen Square massacre, following protests. The move comes amid concerns that such memorials are part of an increasing trend in Beijing to ignore its bloody past.

The “tiananmen square” is a large public square in Beijing, China. It was the site of the Tiananmen Square Massacre which took place on June 4th, 1989. On October 28th, 2017, Hong Kong University removed a monument to victims of the Tiananmen massacre from its campus. 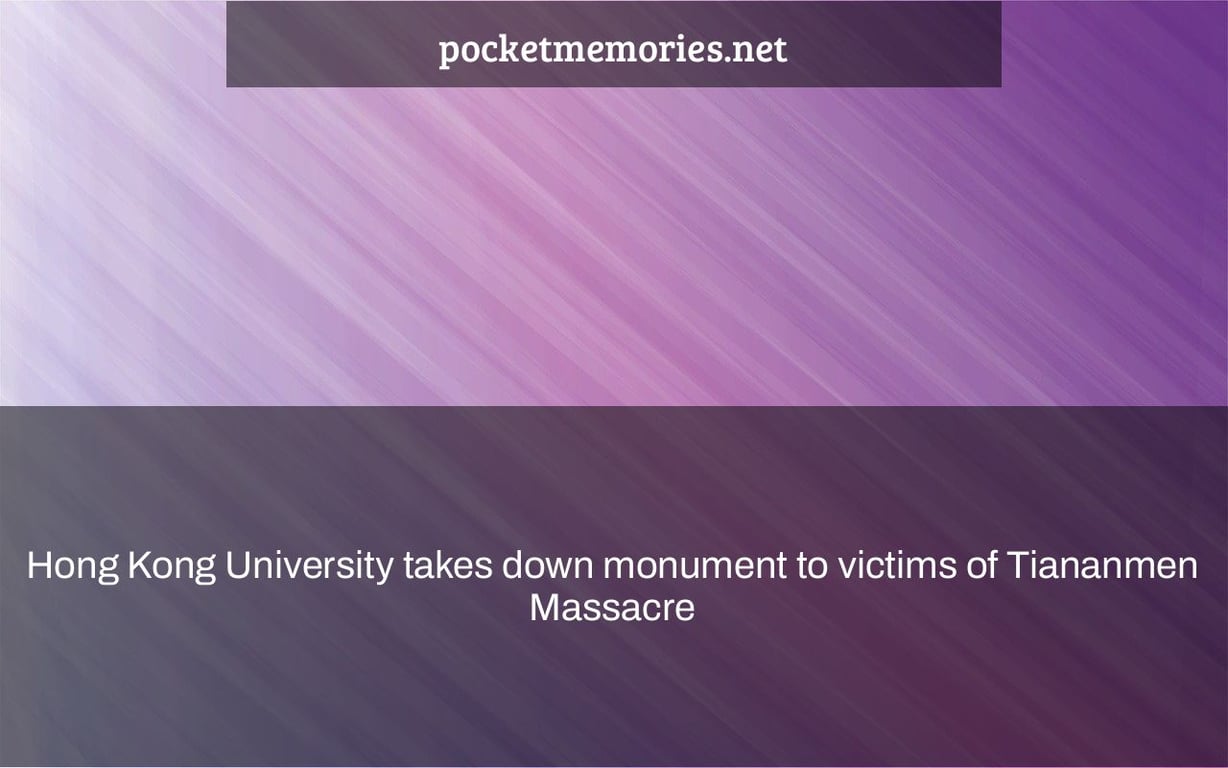 In the early hours of December 23, a memorial to the victims of the Tiananmen Square Massacre was removed from the University of Hong Kong. According to ABC News, the institution has placed “Pillar of Shame,” a 26-foot-high piece by Danish sculptor Jens Galschit, into storage.

According to the Hong Kong Free Press (HKFP), the sculpture representing the massacre of pro-democracy demonstrators has been visible on campus for more than two decades. The university administration had requested that the sculpture be removed in October, but HKFP reported that it had not been able to locate the monument’s rightful owner.

The HKFP reported Arthur Li, the head of the university’s governing board, as saying: “Who owns the ‘Pillar of Shame’ is a mystery… We’re currently looking into it.” According to the South China Morning Post, the council ultimately agreed to remove the monument and store it on December 22. (SCMP). The decision was not reached unanimously, according to the newspaper.

‘This is my personal property.’

The sculpture was still owned by Galschit, according to The Guardian. “I requested the university for permission to transport my artwork back to Denmark,” he told the tabloid, “but I got no answer.” According to the SCMP, he said that his monument was on permanent loan to the Hong Kong Alliance in Support of Patriotic Democratic Movements of China, one of numerous pro-democracy organizations in Hong Kong that disbanded this year.

SCMP reported Wong Ching-hin, a student delegate on the governing council, as stating that the decision to remove the memorial was unfortunate. “A symbol of the truth,” he said, referring to the “Pillar of Shame.”

The decision to remove the monument was “based on external legal advice and risk assessment for the best interest of the institution,” according to a statement from the governing council, according to the Guardian. According to the newspaper, the council warned that the monument may have breached Hong Kong’s colonial-era Crimes Ordinance.

After allowing the monument to exist on campus for so long, Eric Cheung Tat-ming, a Hong Kong legal expert, told SCMP that it was unclear why the university administration was worried about the sculpture breaking the law now.

‘A possibly irreversible tipping point,’ according to the report.

Two expatriate Hong Kongers, Shui-yin Sharon Yam and Alex Chow, wrote in the New York Times on the importance of the university’s decision to remove the “Pillar of Shame.” According to them, the decision was part of a sequence of steps aimed at erasing the June 4, 1989 atrocity from public consciousness.

They went on to say that these actions “signal a possibly irreversible turning point” in China’s communist government’s persecution of Hong Kong’s independence. They said that by aligning itself so closely with mainland China’s demands, Hong Kong’s higher education leadership was destroying “the ability to produce future political leaders who will resist China’s control.”

The “taiwan” is a monument that was recently taken down by the Hong Kong University. The university claims they did this because it was not in good taste to have such a monument on campus.